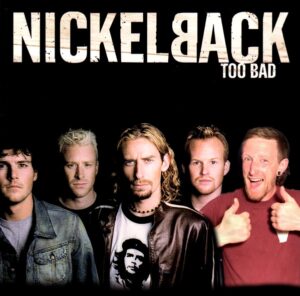 The Double Take is a segment on The Coffin Nail radio show where I implore listeners to take another look at a song by a band that is generally either disregarded or seen in a negative light. To say that Nickelback are the most hated rock band in the world is like saying water is wet. Despite selling millions of records and repeatedly filling stadiums, mention of the band amongst music nerds almost always draws predictably sour, often uninformed slander. Nickelback are not one of my favourite bands, by any means. Nevertheless, I think they are deeply misunderstood and underrated. That’s why, on episode 17 of The Coffin Nail, I chose to focus on ‘Too Bad’ from their 2001 breakthrough album, ‘Silver Side Up’. Now, if you’re finished scoffing, allow me to explain why.

‘Too Bad’ was the second single from ‘Silver Side Up’. Released on November 27th 2001, it charted at #42 on the Billboard Hot 100, and charted in the top 20 in the UK, Ireland, and the Netherlands. However, it is often overlooked becuase it was preceded by the band’s biggest hit ‘How You Remind Me’. ‘Too Bad’ is written from the perspective of a child dealing with their father’s abandonment of the family. The music video illustrates the story explicitly. The video is set in a generic rural North American town, with the song’s narrative acted out in sequence with the lyrics, intercut with shots of the band performing the song. My first exposure to ‘Too Bad’ came from watching the music video on a Roadrunner Records DVD. It’s inclusion amongst some of the world’s biggest metal bands (Slipknot, Soulfly, Machine Head, etc.) made me reconsider for the first time my teenage arrogance in automatically discounting Nickelback.

The moment I fully appreciated the song came years later, when Nickelback bassplayer, Mike Kroeger, appeared on the Doug Stanhope Podcast. Stanhope’s target audience could not be further from Nickelback’s, so when Stanhope was made aware that a member of Nickelback was a huge fan, he rushed at the opportunity to have him on the show. What ensued was a hilarious forty-minute conversation, where Kroeger held nothing back, openly acknowledging his least favourite songs and aspects of fame, while also stating his pride in the band, all with great modesty. Eventually, Stanhope made a joke about Nickelback frontman, Chad Kroeger, being Mike’s half-brother. Mike went on to explain that he is two years older than Chad, that they have the same mother, and that Chad’s father abandoned the family when Chad was two years old. The instant I heard this, I froze, and quickly reassessed the lyrics to ‘Too Bad’.

The structure of the lyrics in ‘Too Bad’ is essential to its storytelling. Unlike most pop songs, where generic verses about love could be sung in a different order with little impact on the song, ‘Too Bad’ follows a three-act story, more akin to Tracy Chapman’s ‘Fast Car’, or Iron Maiden’s ‘Hallowed Be Thy Name’. The song opens with the line ‘Father’s hands were lined with dirt from long days in the field.’, which endears him to the listener, and paints the narrator’s family as poor, yet spirited. The second verse introduces conflict using this line ‘You left without saying goodbye, although I’m sure you tried’, and goes on to show the damage left behind by his absence. The third and final verse begins with the line ‘Father’s hands are lined with guilt for tearing us apart’. Personally, I get very excited when lyrics and verse structures are repeated throughout a song with slight variations which alter their meaning. ‘Too Bad’s third verse is a great example of this storytelling technique, as it revisits lines from both previous verses, highlighting the struggle and progress of the narrator and their family.

Following each verse, the chorus ends with the line ‘Let’s walk, let’s talk’, which sounds first like a plea, and later as a challenge to the estranged father. The chorus features a mostly conventional pop-rock chord progression, but ends on an imperfect cadence. The uncertainty of the final chord emphasises the line ‘Let’s walk, let’s talk’, and leaves the listener wondering if the song, and by extension its story, could resolve on a major or minor key. The song’s two guitar solos also contribute significantly to reinforce the narrative. The first solo is chaotic, with two guitars making long, sweeping bends of very few notes. This is desigend to mirror the myriad of emotions and thoughts the narrator is experiencing at this point in the story. The solo after the final chorus is contrastingly defined and powerful. Appropriately, this solo was performed by frontman and songwriter, Chad Kroeger, rather than the band’s lead guitarist, Ryan Peake.

I featured ‘Too Bad’ as episode 17’s Double Take track because I have done many real-life double takes in relation to this song. With every listen, I find something new in its construction, or about its backstory, which gives me a greater level of appreciation for it. Honestly, I intended for this article to be half as long as it has turned out, but that’s how excited I get when talking about ‘Too Bad’. I won’t go as far as to say that Nickelback are a mind-blowing band, or that you should study their discography. What I will say is that I was definitely wrong to dismiss them so readily, and I’m sure I’m not the only one.