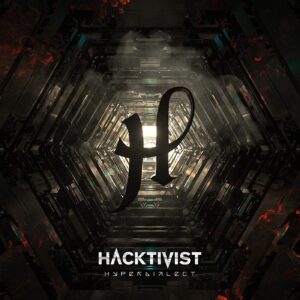 On June 18th 2021, Hacktivist released their second album, ‘Hyperdialect’. It featured as Album of the Week on episode 17 of The Coffin Nail, where I had the privilege of interviewing Hacktivist frontmen, Jay Hurley and Jot Maxi. Since their inception in 2011, the band have released one other full length album as well as a slew of singles and EPs. ‘Hyperdialect’ makes it clear that this approach is not the band’s response to modern media consumption, but simply because Hacktivist don’t release sub-standard material. In just forty-four minutes, ‘Hyperdialect’ cycles through all the sounds that made Hacktivist who they are, while pushing those sounds into thrilling and unique directions.

The most prominent aspect of Hacktivist’s style is the vocal interplay between frontmen, Jay Hurley and Jot Maxi. Most tracks see them exchanging rapping duties on each verse, and sometimes every 8 bars within a verse, as per the classic hip hop format. Jot Maxi officially joined Hacktivist in 2017 and while I am more familiar with original vocalist, Ben Marvin, there is no doubt that Jot’s snarl complements Jay’s high-pitched, frenzied delivery much better. Jot also provides hardcore-style screams in most choruses, another natural evolution to the Hacktivist sound.

This vocal arrangement might be expected to sit on top of the music rather than within it, but Hacktivist’s songwriting favours a more holistic approach. In the demoing phase, the band members exchange ideas online which are expanded on and ultimately arranged by guitarist and producer, James Hewitt. The result is that no Hacktivist song feels like the voice of just one performer, as is often the case with most hip hop or metal bands, but as the voice of five distinct personalities, all working in synchronicity.

Lyrically, the album directly addresses many grim realities of the world, most notably on album closer ‘Reprogram’, and second single, ‘Planet Zero’. The latter’s music video adopts a confronting aesthetic, depicting the band performing against a post-apocalyptic cityscape. When I asked Jay and Jot Maxi about the album’s tone, Jay said, ‘It’s definitely a grim view of the world… but we know how to have fun as well.’ Jot continued, ‘We do talk about a lot of dark, controversial issues… but [Hyperdialect]’s meant to be a light in the darkness.’ This is demonstrated from one song to the next, as ‘Hyperdialect’ leads the listener through alternating feelings of outrage, hope, and introspection. Despite the sustained intensity of ‘Hyperdialect’s subject matter, the effect is more invigorating than draining.

‘Hyperdialect’s structure is practically flawless. The slower, more grime influenced songs like ‘Turning the Tables’, and ‘How Dare You Exist’, when compared to the relentless brutality of songs like ‘Armoured Core’, and title track ‘Hyperdialect’, provide a natural ebb and flow to the album. Opening track, ‘Anti Emcees’ tells new listeners exactly who Hacktivist are, while still feeling familiar to long-time fans of the band due to its classic Hacktivist format. However, this format is then flipped on its head with a surprising black metal-style blastbeat interlude. In its wake, the seamless transition between ‘Luminosity’ and ‘Lifeform’ adds great urgency and excitement to the front end of the album. In our interview, Jay told me that ‘Lifeform’ is one of the less lyrically involved tracks and is basically a ‘party’ song. While that is ostensibly true, it’s also one of the most sincere songs on the album. The delicate interlude after the second chorus sees Jay and Jot deliver more soft-spoken, personal verses than anywhere else on the album. And when Jot sneers ‘I was born where punk was born’, the listener can’t help but feel like he is defiantly staring down both genre purists and long-time fans who think they know how to expect Hacktivist to sound.

The most surprising and interesting moment of the album comes in ‘Ultima Dies’. While short interlude tracks to give the listener reprieve are not uncommon on extreme metal albums, Jot Maxi told me that ‘Ultima Dies’ is actually a skit. Skits are a common trope of hip hop albums, and while this serves to show the diversity of Hacktivist’s influences, it’s also the heaviest song on the album. The band were intentionally evasive with me regarding the song’s origin and meaning, hoping that fans will interpret ‘Ultima Dies’ on their own terms. Obviously, this adds to its mystique, but what I find most interesting about ‘Ultima Dies’ is that the album would still function without it, yet benefits hugely from its presence. Against ‘Hyperdialect’s anthemic mixture of riffs, poetry and hooks, ‘Ultima Dies’ stands out, while simlutaneously fitting in. The fact that I still don’t understand ‘Ultima Dies’, makes it all the more intriguing to me. When a British rap-metal band can implement skits with more nuance than MF Doom, you know this band is something special.

I could gush endlessly about every song on ‘Hyperdialect’ and how I feel the album should be seen both as an accomplishment worthy of thorough analysis and, more importantly, a fun experience. From my first listen to my twentieth, I still don’t think there is a weak song on ‘Hyperdialect’. Recently, there has been no shortage of great new metal and hip hop music, but with the exception of Protest The Hero’s ‘Palimpsest’, it’s been years since I’ve heard an album so perfectly assembled. Hacktivist’s progression over the last ten years has been from above-average crossover act to one of the most unique and exciting names in the current roster of alternative bands. This is in keeping with my impression that a Nu-Metal revival would be more likely to sound like a merging of the technical, yet groove-based riffs of Meshuggah (which are now omnipresent in almost all forms of metal), and the unapologetic authenticity of grime rappers. ‘Hyperdialect’ is confirmation that not only have Hacktivist transcended the genres they originated from, but that they are leading a new style that will be imitated for years to come.